In celebration of Long.Live.A$AP. reaching a 10 years strake A$AP Rocky has dropped a reworked version of the music for ‘Angels’. The ‘Angels Pt. 2’ music video is shorter and of course, serving inspiration for New York. Rakim Mayers changed a few significant elements in line with his regular style to keep things interesting and assist his audience to celebrate. The music video features unseen footage of the late A$AP Rocky who has a halo on his head alongside friends.

Rocky raps mostly about his turbulent and drug-filled childhood before his unavoidable rise to fame throughout “Angels.” He becomes vulnerable when talking about recruiting other kids to help him in his criminal activities and selling marijuana and crack cocaine at a young age. The fans seem to like the music video with some of them saying things like, “This song still fire 10 years later,” and “It’s crazy how timeless this is, he can release an alternative video and it’ll still feel fresh 10 years later. To watch the music video click below: 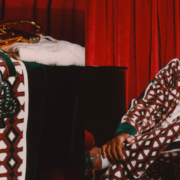 The second Puma x Dapper Dan Collection is Out