Lucasraps is undoubtedly one of the most prominent young rappers in the country. He was the innaugaral winner of Sportscene’s “Put Me On” competition and saw his stock skyrocket following his performance on Dr. Peppa’s “What It Is”, alongside other singles like “Big Time Shlappa” (Ft. Blxckie) and “Without Me”.

With all eyes on the young KZN native, he released his debut album, 031 To The World, on the 1st of October under Def Jam Africa. The album was seen as one of the premier Hip Hop releases of the year and featured standout songs like “Mud”, “Without Me” and “Johnny Dang”. Yesterday, Lucasraps took to socials to announce that he will be releasing a deluxe version of 031 To The World on the 5th of August.

Earlier this year, Lucasraps took to SoundCloud to share a few songs he’s been sitting on in the form of a compilation release titled Location Hurting 2.0 . I do not think that anything on the SoundCloud release is indicative of anything we will hear on the deluxe album, but it’s still something you can listen to while you wait for the album. 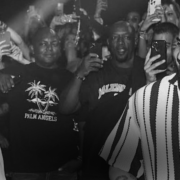