Andre Dontrel Burt Jr. professionally known as SoFaygo is an emerging American artist. The 20-year-old Atlanta-based artist has been working his way up and his dedication led him to be part of the XXL Freshman class of 2022. He has four bodies of work with a brand new one released today. The new album is titled Pink Heartz, SoFaygo has released four songs off the album and it is going to have an Apple Music Up Next Film Edition.

SoFaygo rose to fame after the release of what became his breakthrough song ‘Knock Knock’ which went viral on social media in the emergence days of TikTok. Yesterday he released the official album cover art and full tracklist. The album the a total of sixteen songs and it has five features from; Dj Khaled, Lil Uzi Vert, Gunna, Don Toliver and Ken Carson. People on social media had mixed feelings, fifty percent of the masses weren’t excited about the album or the tracklist but the other fifty perfect was quite excited.

The album is finally out, it opens up with a mellow song titled ‘Transparency’ and it is quite self-explanatory as he is being transparent about his emotions. The following song ‘Me Too’ sounds heavily inspired by Travis Scott, and unlike the first song, this one is an upbeat trap record. Listen to Pink Heartz below. 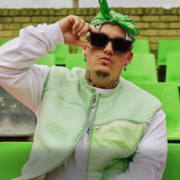