Byor took to socials to announce that his upcoming album LIFE IS GANGSTA will be dropping on the 10th of June, along with the tracklist for the album. LIFE IS GANGSTA is shaping up to be the album that adds fuel to the Thato Saul fire following his 2020 collab tape with Mashbeatz, IF YOU KNOW, YOU KNOW.

Included in the list of features are fellow Pretoria natives A-Reece, Tron Pyre and Tyson Sybateli, Alexandra’s Marcus Harvey and Klerksdorp Maglera Doe Boy. We have already been gifted with singles from the album in “R.I.P. Fat Cat” and “Okay” featuring Maglera Doe Boy – if these two singles are an indication of the sound we will hear on the album, it will be a welcomed detour from his last solo effort, Members Only. There is no doubt that the Pheli raised rapper will be eager to silence some of the detractors that compare him to another Pheli rapper… If you know, you know. 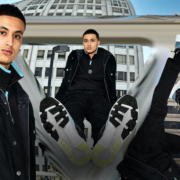 TRC BLAZE – A NEW ANGLE FOR THE PUMA TRINOMIC