Canadian singer and songwriter The Weeknd surprised his fans/supporters with the announcement of the Is There Someone Else? music video on the week of Dawn FM one year anniversary.

On the day of the album anniversary, Abel released the official visual representation of Is There Someone Else? and it has been well received.

On this song, The Weeknd asks his lover if there is someone else she is involved with other than him. Although he hints that he has not been loyal in his past relationships, he claims that he changed and begs her to be with him forever. 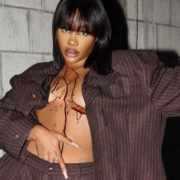