Tyler ICU is easily one of the most prominent Amapiano contributors in the country, however, he has not had the pleasure of being afforded the attention his counterparts have enjoyed. Perhaps a victim of his own versatility, lending his production to other genres like Hip Hop, the young producer is staking his claim in the genre with the release of his Buya Nini album.

In the build-up to the release of this album, Tyler ICU released a single titled “Inhliziyo” featuring New Money Gang stable heads, DJ Maphorisa & Kabza De Small, alongside songstress Nkosazana’s Daughter. I’m hesitant to call it a single as it doesn’t feature on the album, which I guess points to the extensive quality of his vault.

The album is littered with a mix of some of the brightest rising talents in Amapiano like Dinky Kunene, Tabia and “Umlando” hit-maker Toss, alongside cemented artists in the genre like Sir Trill, Bontle Smith, MFR Souls and Young Stunna. The album shows Tyler ICU’s mastery of the genre with him providing a balance between ‘deep’ Amapinano songs like “Ntoni” (featuring Toss, Bontle Smith & Sauwce), with a mix of ‘private school’ Amapiano songs in the opening 3 songs “Se’nyuka” (featuring Chley Nkosi), “Mlanjeni” (featuring Kailey Botman, Lesa Molapo & Kiddy On The Beat) and “Lavo” (featuring Azana, Bongane Sax & Yumbs). On a personal note, I have recently started to listen to Dinky Kunene and it comes as no surprise that her performance on “Ngthande” is my favourite song… well, at least for now. She has an interestingly ‘spiritual’ and ‘inspirational’ approach to production that is gritty and provides a contrast that strikes a chord with me. What is your favourite song on the album so far? Listen to Buya Nini below. 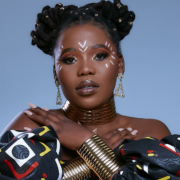