Fireboy DML is a Nigerian singer/songwriter, he rose to the limelight after being signed to YBNL Nation which is under fellow Nigerian singer and rapper who is described as “one of the biggest and most influential artists in Africa” – Olamide. Fireboy recently released his third studio album titled Playboy and now he released the visuals of the second song from the album “Bandana.”

“Bandana” sees Fireboy discussing on tenacity in pursuing music while highlighting the help he’s received from family and friends.

“Bandana” features Asake and it opens up with a guitar-based beat which sounds quite familiar, I might be wrong but the opening sounds like a sample from the iconic Bob Marley’s 1980 “Could You Be Loved” song which was released as part of his Uprising album. If you haven’t listened to “Bandana” or watched the visuals, do so below: 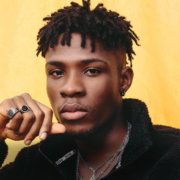