Stormzy has released the music video for ‘This Is What I Mean’ coming off the newly released studio album This Is What I Mean. The song features Amaarae, Black Sherif, Jacob Collier, Ms Banks & Storry a phenomenal crossover that has an adrenaline tube with an energy tube that no one would think would be possible. The music video starts off with Stormzy at what looked like a private venue with people taking video before it moves to Jacob Collier who starts off with vocals that sound angelic and continuously collide against each other as Stormzy raps over his vocals.

Storry comes in with opera-like vocals in a green fire background, followed by Amaarae and Ms Banks who also brought in a different vibe that matched perfectly with the song. Black Sherif finish off nicely with an energetic rhythm and vibe also with visuals that are deemed down but have a fiery background matching the vocals perfectly, the song and music are a sonic explosion. To watch ‘This Is What I Mean’ click below: 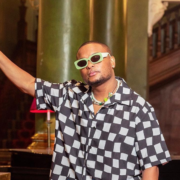